Awards are used to bring attention to communities that have distinguished themselves by exemplary performance in various areas of service. Awards are measures of success that declare achievements to be above normal levels of performance in a given area.

The following list highlights some of the awards and recognition's achieved by Maple Valley.

"One of the Safest Places in Washington" 2015 - ValuePenguin

"The Best Towns in Washington for Raising Kids" 2013 - NerdWallet 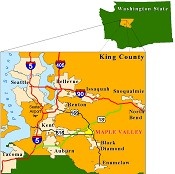 The City of Maple Valley incorporated August 31, 1997. The City is 5.8 square miles, located east of Kent and Covington, and north of Black Diamond. Maple Valley is located  about 30 minutes east of Seattle and Tacoma, equidistant from the water of Puget Sound and the landscapes of the Cascade Mountains. Maple Valley offers an extraordinary location to enjoy all that our region has to offer.

A high percentage of residents are college educated, approximately 75% of adults have post-secondary education. In addition, Maple Valley has one of the highest median incomes in King County, $107,299 (in 2018 Dollars) per household. High household earnings and comparatively low cost of housing provide Maple Valley residents, on average, with more disposable income.

There is a multitude of early learning programs within Maple Valley as well, including the Early Childhood Education and Assistance Program and co-op programs which partner parents in their child’s early learning.

Within easy driving distance from Maple Valley, higher education opportunities are found at Green River Community College, Renton Technical College, and the University of Washington, to name a few.

Maple Valley is a thriving and growing community that embraces education and community and the opportunities that they bring.

There is every option available when it comes to housing in Maple Valley including apartments, senior housing, townhomes, and single family residences. Many of the developments in Maple Valley take advantage of the beautiful natural environment that the City has to offer. In the greater Maple Valley area, it is not unusual for homes to be on multiple acre sites and some have pastoral environments with horses, cows, sheep, alpacas, llamas and emu.

In the center of the City there are multiple neighborhoods with tree-lined streets, community parks and access to much of the nature that makes Maple Valley special. Many neighborhoods have access to extensive trail systems that lead to the Black Diamond Mountain Biking trail system, Lake Wilderness Park and Arboretum, the Maple Valley Library, and that link up to the Green to Cedar Rivers Trail which leads all the way into Renton. The trail system has the potential of leading someone all the way into Downtown Seattle and it also has multiple connections to the business community. The City of Maple Valley sits along the eastern edge of King County’s urban growth boundary, which discourages growth outside those boundaries leaving Maple Valley on the edge of nature’s beauty. It is truly a wonderful and unique natural setting. The median price for a home sold in Maple Valley is around $359,955.

Maple Valley has three lakes, two golf courses, and several miles of trails, including the Green to Cedar Rivers Trail that connects to the Cedar River Trail.

Maple Valley is the location of a number of major events each year, including:

For utility companies that serve Maple Valley and other new resident information, click on the link below:

The following are the key tax rates for 2019. The property tax rate changes annually. Other changes will require State authorization:

Please contact Finance Director Sandy Garrett at sandy.garrett@maplevalleywa.gov if you have any questions.