In 2007, the City Council approved the master plan for Lake Wilderness Park & Lodge. The plan includes 10 different phases of work that will be spaced over a 20-year period of time to allow adequate funding sources to be developed and secured.

The goal of the master plan is to create a tool to guide the future of the Park beyond a design blueprint. It will ensure that future projects undertaken, from capital improvements to on-going maintenance and operations will be a strategic part of making Lake Wilderness Park & Lodge a more cohesive whole in keeping with the City's vision.

The final master plan for the Lake Wilderness Park & Lodge was created with input from a variety of people including a stakeholder group comprised of citizens representing a wide range of community interests. Input about the plan was gathered at two public workshops and at various public events over several months.

In 2008-2009, the City completed a remodel of the Lake Wilderness Lodge. This work, which was identified as a portion of “phase 3” priority of the overall master plan, was done first due to the availability of a large State grant that were available at the time.

In 2015, the City completed two much needed infrastructure improvements to Lake Wilderness Park that were identified as portions of “phase 1” and “phase 2” priorities in the 2007 master plan;

In December 2017 the City replaced the playground equipment, and reopened the new playground with a ribbon cutting event on December 29, 2017.  The project is projected to be fully completed in January 2018. This project was a “phase 8” priority in the original plan.

In 2018, the existing beach house, also built in 1972, will be replaced with a new beach house. This work was identified as a “phase 2” priority.

Invitation To Bid on the Builders Exchange Of Washington, Inc. 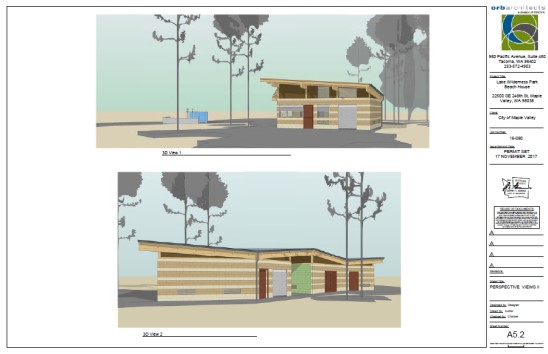 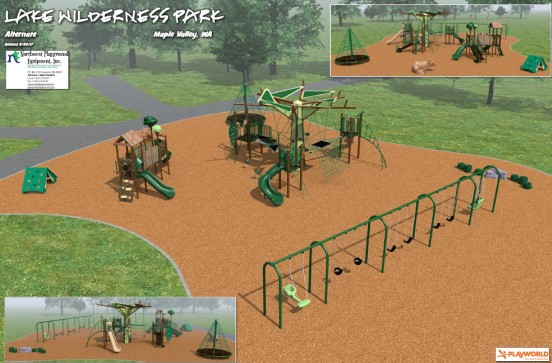 
Free viewers are required for some of the attached documents.
They can be downloaded by clicking on the icons below.