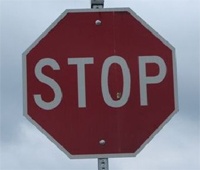 Stop signs are not to be used as traffic calming devices. Stop signs serve a critical function and their placement should not be arbitrary. Misplaced signs tend to lower compliance, which can be dangerous:

Unneeded stop signs are frequently ignored. Drivers on the major street either roll through or run through the stop sign because, in their experience, there is little cross-traffic. This puts pedestrians and cross-traffic at risk.

Numerous studies nation-wide have shown that speeds within a block of the stop sign are largely unaffected by the stop. Naturally, motorists have to slow down when approaching a stop sign. But, they often speed up quickly after the stop to make up for lost time. Overall speeding is not reduced by the stop sign. Tests have shown that traffic calming devices such as speed humps are much more effective at slowing speeds over a stretch of roadway.

Stopping and starting cause increased tire and engine noise. Residents living near the stop will experience an increase in traffic noise. Stopping and idling at unwarranted stop signs also increase automobile exhaust and fuel consumption unnecessarily.

A stop sign is a valuable and effective traffic control devices when used at the right location and under the right conditions. There are certain warrants which must be met according to the Federal Highway Administration's Manual on Uniform Traffic Control Devices (MUTCD) that are used to justify the installation of stop signs. These warrants consider sight distance, traffic volume, and the frequency of gaps that occur in traffic that allow for safe vehicle entry or pedestrian crossing. The MUTCD also maintains that stop signs are never used for speed control. 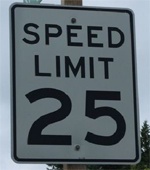 Will posting lower speed limits alleviate speeding in my neighborhood?

Engineering studies show that speed limit signs are not the most significant factor influencing driver speeds. Research indicates that a reasonable and prudent driver will drive the speed suggested by roadway and traffic conditions, to the extent of disregarding the posted speed limit. The Washington State Department of Transportation emphasizes that the "laws cannot be effectively enforced without the consent and voluntary compliance of the public majority." A speed limit that is unrealistic invites the majority of drivers to disregard posted speeds.

How are specific speed limits established?

Prevailing speed studies, roadway geometry, sight distance, roadway use factors, and accident history are considered in the investigations. If these factors are not limiting, the 85th percentile speed is used to set the speed limit. The 85th percentile speed is the speed at which 85% of vehicles are traveling at or under. It is generally accepted that this speed is considered reasonable for the roadway unless superseded by the factors listed above.

Lowering the posted speed limit does not significantly lower traffic speed, and can lead to unreasonable ticketing for acceptable driving behavior. 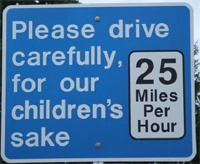 While it may seem that this sign would protect neighborhood youngsters, facts indicate otherwise. Although some communities have posted these signs in residential areas, no evidence exists to prove that these signs help reduce pedestrian accidents or lower speeds.

Studies have shown that many signs in residential areas, which are installed to "warn" people of normal conditions, fail to improve safety. Pedestrians can get a false sense of security since drivers often disregard these signs. Signs that encourage parents or children to believe they have added protection (which they do not) can do more harm than good. Children should not be encouraged to play in the street. Federal standards reject these signs because they openly suggest that playing in the street is acceptable.

Since children live on nearly every residential block, if used, the signs would have to be placed on each street. Blocks with no signs might imply that no children live there, so it is all right to speed.

Because of these serious concerns, law does not recognize "CHILDREN AT PLAY" signs. Specific warnings for schools and crosswalks are available for use where they clearly serve a purpose.

Warning signs can be effective tools if used sparingly and only to warn motorists of uncommon hazards that are not apparent to drivers.

Remember, "Children at Play" signs are generally disregarded by motorists and give pedestrians a false sense of security.
View Full Site