Enforcement and Education Play a Role

Enforcement is an important tool and can be employed along with all other attempts to solve neighborhood traffic problems. However, police resources are usually allocated in response to specific occurrences, rather than on-going situations, and are limited by the many calls for service.

In addition, actual field studies of neighborhood traffic problems show that in many instances, the majority of motorists using residential streets are the neighborhood residents themselves. In general, outsiders speeding through the neighborhood are only part of the problem. That’s why community education is a critical step in the problem-solving process. 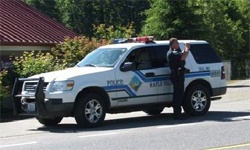 If it’s determined that speeding is the primary concern, for example, residents could work with the City to circulate a flyer to the neighbors stating concerns and asking motorists to slow down. Sometimes, motorists just don’t realize how fast they are really going. The City of Maple Valley has a self-contained Radar Readerboard which electronically clocks the speed of an oncoming vehicle and posts the number on a digital display. The automatic device can be used to help educate drivers- or with a patrol car standing by, to enforce speed restrictions.

Since education and enforcement alone may not do the job, the City may make one or more relatively modest physical changes to the street environment. These actions may be quite simple, such as trimming brush that obscures visibility for the motorist. Other typical Phase I interventions include:

If Phase I solutions are proving ineffective after having been in place for 1 to 2 years, more restrictive traffic calming devices may be considered in Phase II.